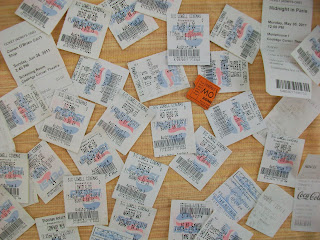 The idea was to watch and review a movie a week for a year. It happened, for the most part, as planned. I didn't quite hit the 50 movie mark, but what do you expect from an Unreliable Narrator? For this blog I have written almost entirely about movies since October of 2010. All my literary thoughts got funneled through my posts over at Beyond the Margins.

I had some guest posts, for The Illusionist, Harry Potter, and The King's Speech. That freed me up for a few weeks here and there, and I suppose that's cheating. But sometimes when writing for two blogs and keeping up other non-blog writing, you need a break. 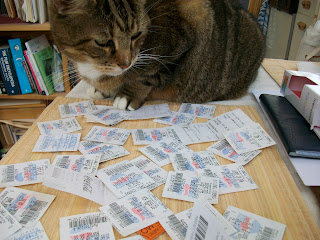 I did not end up reviewing 52 movies. But, I didn't do too badly. I reviewed 38 new releases, along with a couple of older movies I saw on the big screen including Touch of Evil and Tron. I also reviewed the films I enjoyed at the Disposable Film Festival, which the Lowell Film Collaborative brought to Lowell last year. I posted an appreciation of Steel Helmet, the Korean war film by Samuel Fuller and wrote an essay comparing Tarantino and Sam Packinpah. I also ran a duel DVD review of Easy A vs. Machete.

Thanks to this experiment I saw some gems that I may have otherwise passed over, including Cedar Rapids, Limitless, Bridesmaids, Inside Job, The Social Network, and True Grit. I saw The Fighter with an adoring hometown audience (Lowell, MA!) and got my twelve year old on with Transformers, Captain America, Priest, and Rise of the Planet of the Apes. 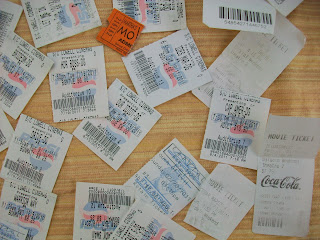 I would also like to take a moment to lament the eight hours I will never get back watching Battle: Los Angeles, Drive Angry 3-D, The Dilemma, and The Warrior's Way. Also, I found out how crappy a movie-going experience it can be watching a 3-D movie, with those dimming, uncomfortable, very low-tech glasses.

I saw most movies here in Lowell, at the Showcase Cinema, a decent mainstream theater with stadium seating. But I also saw movies in Arlington, Cambridge, Brookline, Oak Bluffs, Woburn, Waltham, and back in Lowell at the Historical Park Visitor's Center theater. 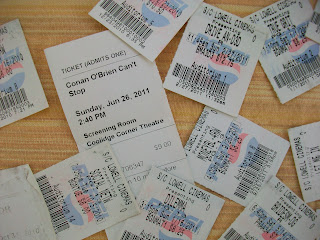 Did I capture that feeling I had when I was a kid? That excitement, that anticipation? Sort of. I have to admit that watching the action spectacle that was The Transformers was a guilty pleasure bar none. And laughing along with a full theater at Horrible Bosses was also an oddly comforting, communal experience. In the same way I groaned along with the audience during Hangover II.

I'll always go to the movies. Just this past week I went to see a great film at the Historical Park Visitor's Center (another unique viewing experience sponsored by Suzz and Brett of the Lowell Film Collaborative!) called Of Dolls and Murder. The director, Susan Marks, was on hand to discuss this documentary about crime scene doll houses created in the 30s and 40s by Frances Glessner Lee and used as forensics training for detectives. 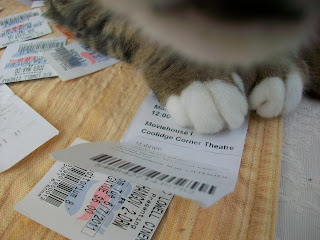 What's next for Unreliable Narrator? Not sure yet. I may go back to writing about writing, books, and reading. I also have another idea, another possible direction for this blog. I'll let you know in the next few weeks.

Thanks to everybody who reads Unreliable Narrator and also to those who leave comments. The comments and views really keep me going.

Email ThisBlogThis!Share to TwitterShare to FacebookShare to Pinterest
Labels: movies

Final Review: The Ides of March 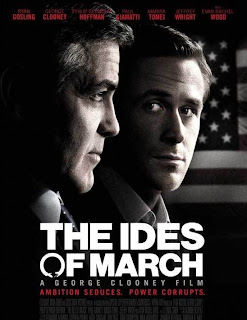 What? You didn't know these movie reviews were a limited time thing? Yes, I have completed my goal of writing movie reviews for a year. I didn't quite achieve one review per week, but came close. In my next post I'll do a wrap up of my findings and introduce my ideas for the next iteration/generation of this blog (as soon as I figure out what that will be).

Meanwhile, for your entertainment value: The Ides of March: 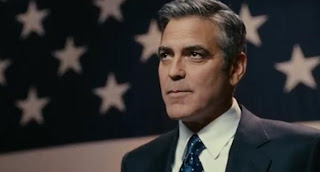 Only one of the above statements is true. Unless you’re a sadist and think politics is actually fun and you are a naïve idealist and believe our political system works as originally designed. 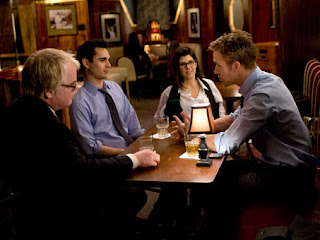 We all know politics is a calling for those who are ambitious, scrappy, and shrewd. But, on the plus side, politics is the most riveting realty show ever created. And it is available for consumption 24/7, in papers, online, on broadcast TV, at work, in your neighborhood, and in your family. Politics in America, for better or worse, is an inescapable fact. 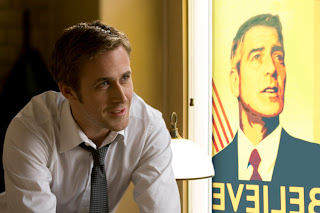 The Ideas of March takes politics today and scrapes away a layer of filth so we can see the filth underneath. Not that we don’t know it’s there. But one thing we don’t always see are all the back room shenanigans, including how decisions are made and at what personal cost. The Ides of March does an admirable job of showing us the cost. 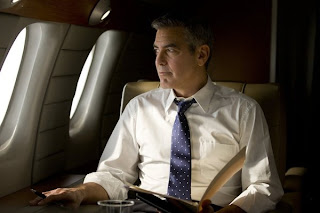 The movie stars heartthrobs of different generations. We’ve got George Clooney (who also directed) as Mike Morris, the democratic governor of Pennsylvania and presidential hopeful in the days leading up to the Ohio Democratic primary, and Ryan Gosling as Stephen Meyers, his devoted, super savvy media consultant. Morris is the frontrunner to win this primary, at least if you ask the voters of the state. This is a big primary, and he may still lose. And if he does, simple math dictates he will go on to lose the democratic nomination. 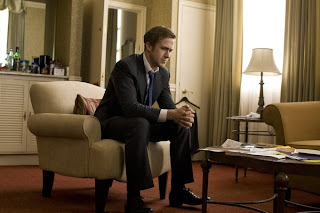 The mechanics of how this plays out include enough shady deals, misunderstandings, backstabbing, and double crosses to fill a pulp fiction novel. But Clooney isn’t trying to emulate Jim Thompson or James M. Cain, so much as ‘70s film moralists like Sidney Lumet and Alan J. Pakula. Clooney knows modern politics is the reality show we all love to hate, so he tries to bring a human face to the proceedings. He conveys well the aphorism that absolute power corrupts absolutely, and shows that politics is less about how to help people than how to get reelected. He uncovers the greed for power and the greed for money. And how you can leverage all the relationships you’ve fostered working in politics to ease into the private sector where you can make some real money. 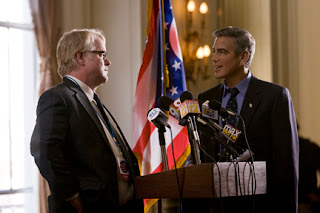 That Clooney’s Morris is a flaming liberal is no surprise considering the character mirrors Clooney’s beliefs as well. That Morris makes missteps that eventually compromise his integrity aren’t very surprising either. But it is always a little shocking to discover that the public persona of anyone—politician, movie star, author—turns out to be the opposite of that which is projected. This is an idea the movie plays with throughout. 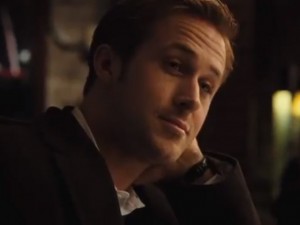 We see most of the action through the eyes of Gosling’s Meyer. At the start of the movie he is enchanted with Morris, believing in the same causes as his boss. But at every turn he is reminded of the true nature of politics by those around him, including Morris’s seasoned campaign manager, Paul Zara (played with nasty gusto by Philip Seymour Hoffman), who has worked on dozens of campaigns and knows exactly what must be done to win an election. Then there’s New York Times reporter Ida Horowicz (played by Marisa Tomei with a gusto that matches Hoffman’s), who will do what she needs to get a scoop about the candidates. 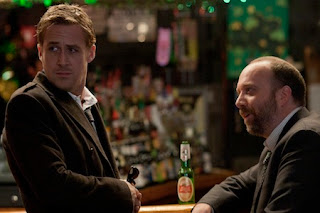 This wet dream of an indie-file cast is rounded out by Paul Giamatti as Tom Duffy, the campaign manager of Morris’s opponent who is playing a game Meyers may or may not be up to. Jeffrey Wright plays Thompson, a senator who has the delegates to help either candidate win the primary, but in return for his endorsement insists a cabinet position. 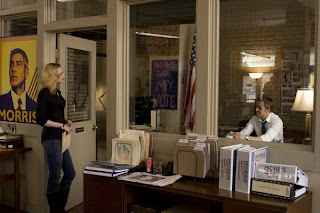 Then there’s Molly, an intern in the Morris campaign office. Molly is played by the young actress Evan Rachel Wood, who is something of a revelation here. Molly is a tricky part. At first you don’t understand her motivations. She sleeps with Meyer (well, considering Ryan Gosling plays Meyer, I guess I understand that motivation) but we wonder if she has an agenda. Wood has to convey naiveté, mystery, and fresh-faced idealism. Her agenda is that of an impassioned post adolescent, an innocent who gets wowed by the bright lights of celebrity and power. The series of revelations and events that befall Molly is a shame, but is only a symptom in the wider contagion of betrayal and corruption on a national campaign trail. 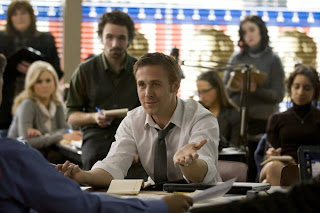 The refreshing part of The Ides of March is that it does not stoop to portray us-against-them politics. Clooney—who also co-wrote the screenplay with Grant Heslov, based on the play Farragut North by Beau Willimon—is not interested in the democrats vs. republicans Fox News bullshit. Party affiliation doesn’t matter, because all parties are equally corrupt be they democrat, republican, independent, or libertarian. 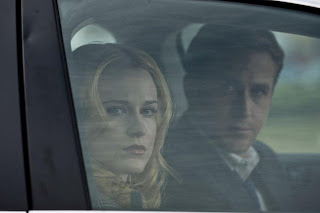 It’s more about how even the best political intentions and moral judgments get waylaid by the money-based political process. To say that process is worse than it’s ever been may be hyperbole. But it ain’t great, and this little nasty insider slice of modern politics just wants to remind you that our process is alive and chugging along, if not particularly well. Not that we need reminding, especially as we collectively prepare to trudge into the mud of the upcoming election year. 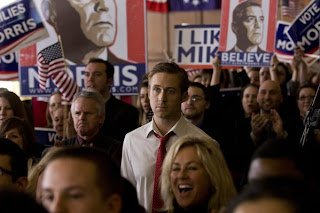 Caution: this preview gives away more plot points than my review:

Twilight: Breaking Dawn Part 1. Surly teens in the Pacific Northwest. Some are vampires. Some are werewolves. Many are shirtless. Some are pale. Somebody gets pregnant. All hell breaks loose.

Young Adult. The welcome return of Charlize Theron, playing a type of obnoxious, crass character that Cameron Diaz nailed earlier this year in Bad Teacher. Theron plays a young adult author returning to her hometown to bag an old crush, who happens to be married. Co-starring the always welcome Patton Oswalt. From 'Juno' writing/directing duo Diablo Cody and Jason Reitman.

The Girl with the Dragon Tattoo. Completely superfluous version of the original. Looks about the same: story, look, characters, even accents. Why bother? I'm surprised such a visionary director as David Fincher took this on. Plus, the original wasn't that hot either. I chock it up to a lame, average story.

J. Edgar. Clint Eastwood is still churning out movies. This one stars Leonardo DiCaprio as the titular character. His aging makeup looks like a triumph, if incredibly creepy and disconcerting.

The Rum Diary. Ah, this is a movie I can get behind. Johnny Depp stars in the adaptation of Hunter S. Thompson's first novel. It has a playful vibe, a beautiful look, Johnny looks swell, and so do the ladies. Something to do with a journalist covering a story on a Caribbean island. Although that plot seems secondary to the drinking and various other Hunteresque shenanigans. Luckily it does not offer the same vibe as Gilliam's misfire Fear and Loathing in Las Vegas.
Posted by Dell Smith at 8:17 PM 5 comments: