My Next Big Thing 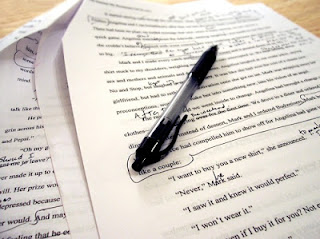 YA author Kimberly Newton Fusco asked me to participate in an Internet happening called My Next Big Thing. My Next Big Thing is a self-interview where published and non-published writers answer 10 questions about their current work. Many national and international writers have participated. It gives readers a glimpse into the working life of a writer.

Big thanks to Kim for choosing me. So, here is my Next Big Thing. At the end of it, I tag three other writers to carry the torch further into the blogosphere. (By the way, check out Kim's third novel, Beholding Bee, out Feb 12.)

What is the working title of your book? The Last Good State.

Where did the idea come from for the book? My parents moved me and my three sisters around a lot as a kid. I loved seeing new places, but I always wondered what it would be like if our family had never left the house we all grew up in. Then, what would happen if our parents sold the house after we had all moved out but a lot of our childhood stuff was still in it.

From there I started thinking about the different personalities of these kids living in my alternative universe house. I grew up on Cape Cod, where the story takes place. I worked in a restaurant in high school and college. The restaurant was run by this couple and they had three kids who all worked there. I got a real inside view of the business and this family. I had been wanting to somehow incorporate that experience into my writing for a while, and combining these two story-lines into one novel seemed like a no brainer.

What genre does your book fall under? It's contemporary fiction. Family drama, if there is such a category. Or family dramady.

Which actors would you choose to play your characters in a movie rendition? I have a hard time mapping my characters to actors. But here's what I came up with. There are four siblings and their parents:

I had no idea the kids were that good looking. The father is a bit unhinged, so Val on a good day could pass. Holly Hunter is great, although I might have to bolster her part a little. If Holly passes, let's give Lea a job. Of course, the part might have to be rewritten. Totally different acting styles.

What is a one-sentence synopsis of your book? After their parents divorce and decide to sell the  family house, four siblings, aged 18 to 28, return home to claim their stuff and run an estate sale before the house is sold.

What other books would you compare this story to within your genre? I've just discovered Jonathan Tropper. He writes a lot about kids going home again and families coming together in crazy ways. I'm not as funny as him, but I guess I'd love to hit both a comical and dramatic tone. I really loved The Corrections, the comic and tragic of one family. I'm not comparing per se, but if there is a family drama category, Jonathan Franzen blazed that trail, at least for me. I also really liked the brother and sister relationship in Dana Spiotta's Stone Arabia, and the thread of family that runs through Jennifer Egan's A Visit from the Goon Squad, A.M. Homes' This Book Will Save Your Life and May We Be Forgiven, and any novels by Bruce Wagner.

Who or what inspired you to write this book? Initially I was interested in a family that was unlike any other family I could think of. I thought, what if each family member was somehow notorious, either a criminal or a reality tv star or some kind of news sensation. I quickly realized that the tone of a story like that was hard to pull off, and I also couldn't come up with sympathetic characters to write about. That's when this other more realistic family came to mind.

What else about your book might pique a reader’s interest? If you're tired of vampires or zombies or post apocalyptic landscapes, then this book is for you!

When and how will it be published? You would have to ask that.


Robin Black is the author of the story collection, If I loved you I would tell you this, a finalist for the 2010 Frank O’Connor International Short Story Prize. She is the 2012-13 Distinguished Visiting Writer at Bryn Mawr College and is currently at work on her first novel. You can read her blog posts at Beyond the Margins where she's a contributor.

Cynthia Sherrick writes adult romantic suspense, although she has written YA along with some short stories and plays, as well. She began writing when she was just six years old. Growing up in a family of writers she knew creating stories was the path she would follow. Cynthia is nearly finished with her third novel and continues to pursue acquiring a literary agent and getting published. She is a member of the Romance Writers of America, New England Chapter of Romance Writers, and Tampa Area Romance Authors.

Juliette Fay’s latest novel, The Shortest Way Home, was chosen as one of Library Journal‘s Top 5 “Best Books of 2012: Women’s Fiction.” Juliette’s first novel, Shelter Me, was a 2009 Massachusetts Book Award “Must-Read Book.” Her second, Deep Down True, was short-listed for the Women’s Fiction award by the American Library Association. Juliette received a bachelor's degree from Boston College and a master's degree from Harvard University. She lives in Massachusetts with her husband and four children. When she’s not trying to keep track of her kids or daydreaming about her next story, Juliette can be reached on her website, Facebook and Twitter.
Posted by Dell Smith at 7:30 AM 12 comments: