Last Sunday I helped Liz set up at a craft show in Worcester called stART on the Street. 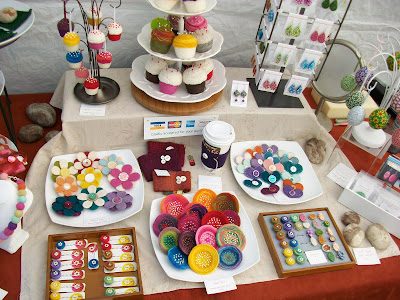 There were hundreds of craft vendors set up on Park Ave.; a mile of white tents running double down the center line. 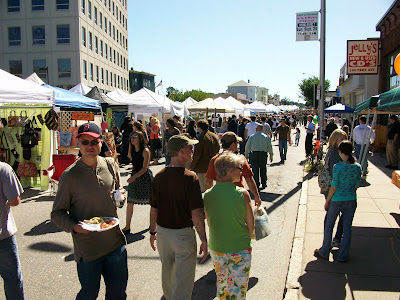 Hundreds, nay, thousands of people walked through during the beautiful Sunday, checking out the crafts, food, and entertainment, which included poetry slams, bands, singers, and exotic belly-type dancing. 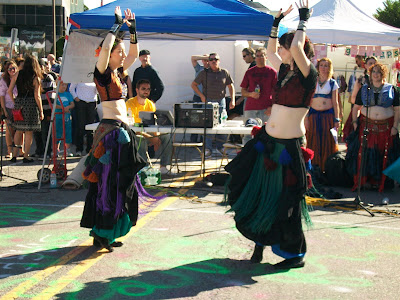 After I finished my rigorous setting up duties, I went a walkin' to check out the scene. A few yards up Park Street from Liz's tent (she was sharing with Candace of the Intuitive Garden) I spied a store called That’s Entertainment. 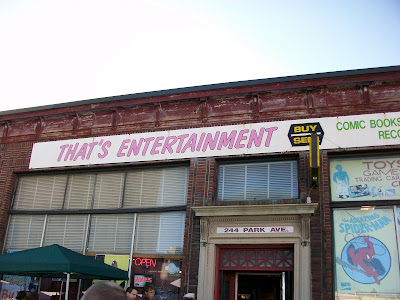 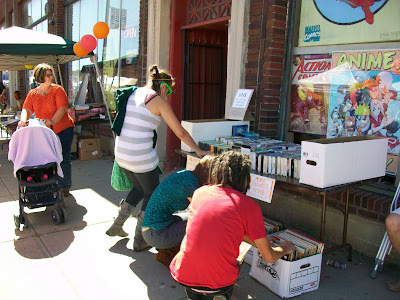 I went to college in Worcester back in the day, but I don't remember any store like this. And it looks like it's been there awhile. (However, I do remember Al-bums. Stacks of cool vinyl.) 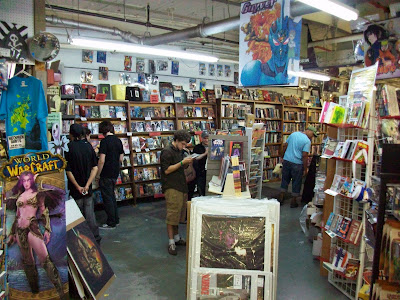 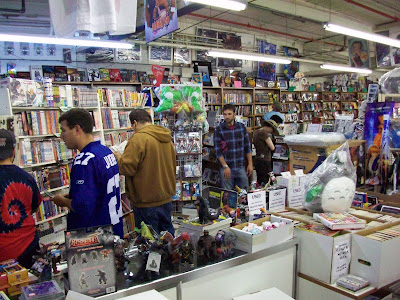 I spent almost 2 hours browsing, checking out the huge selection of unusual comics and graphic novels. At the back of the store I found a trove of used books. Mostly fantasy and sci-fi, but also some tasty pulp novels from the fifties. I picked up a lot of 12 John D. MacDonald paperbacks. 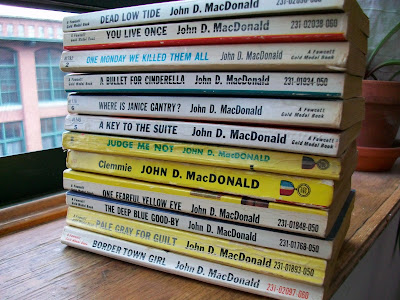 Mostly pre-Travis McGee era titles, with names like One Monday We Killed Them All, You Live Once, and Dead Low Tide. Complete with appropriately lurid cover illustrations: 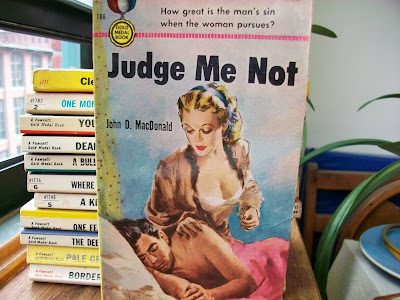 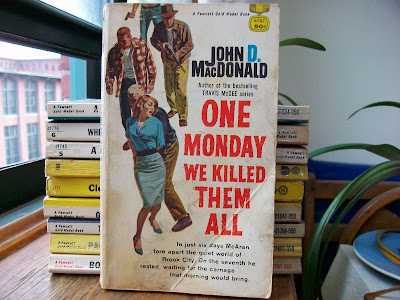 Pretty hot stuff for the 1950s. I've only read titles from MacDonald's color-themed Travis McGee novels (Nightmare in Pink, Darker Than Amber, A Purple Place for Dying) so it'll be fun to see how it all began.

I picked up a new graphic novel I'd been looking for called Filthy Rich. A crime story that takes place in the 60s. I guess my mind has climbed in the wayback machine and broke off the knob somewhere around the end of the film noir era. 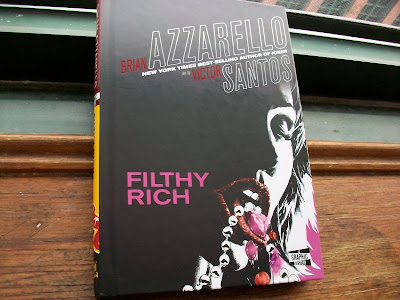 I couldn't resist this oddity from Peter Bagge (creator of Hate and Neat Stuff) called Apocalypse Nerd, about a couple of buddies who return to Seattle after camping in the mountains and discover their city's been nuked. Hilarity ensues. 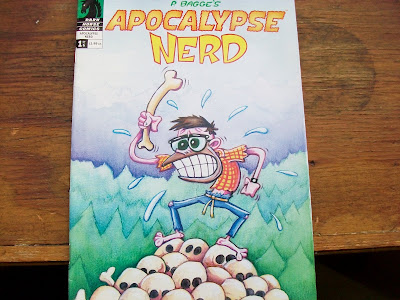 Actually, it kind of does, with Bagge's spot-on character studies of nervous losers and slackers in extremis. This is the first of 6 issues. Guess I'll have to track down the other five to see how it turns out for A. Nerd.

When I finally went up front to pay, I realized the place was jammed with curious and collectors alike. Maybe this had something to do with the crowd: 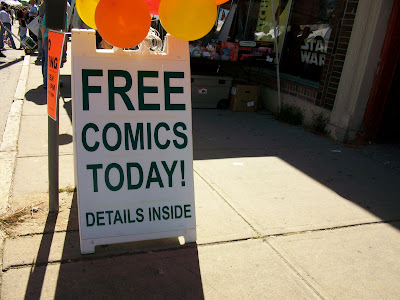 The next time you're in Worcester, head on down to Park Ave. and check out That's Entertainment. Oh, and see you at next year's stART on the Street.
Posted by Dell Smith at 8:36 PM 5 comments: 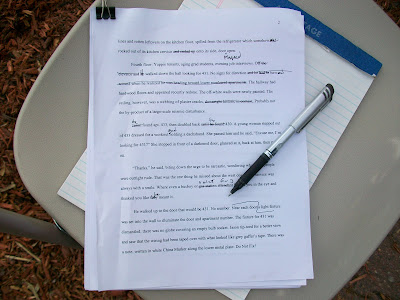 I try not to get too personal about my writing on this blog. It’s challenging enough to write fiction without the blogosphere witnessing. It’s like exercising in public—a little too much information. But part of being a writer (generally) is that we want others to know about it; to share in news of its loving conception and difficult birth. I always hope for a reaction like, “What a beautiful baby!” Even backhanded compliments are welcome. I’ll settle for, “What a unique child,” or even, “He doesn’t look anything like you.”

Currently my writing output is stuck between conception (writing a novel outline), birth (jump starting another draft), short story revision, and dawdling indecision (writing this blog post). I’ve approached my novel from multiple angles, switched up characters’ ages, personalities, and back stories, but I’m still not satisfied that I’ve hit upon the correct mix of variables that will see me through completion of a successful final draft.

Writing outlines can be part of the writing process. Some writers can’t start writing until they have a complete outline. Some writers blanch at the mention of writing from an outline. Then there are writers like New York Times bestselling author Ms. X, who had been researching the shit out of her second novel for a few years before she signed a book deal, and faced a hard deadline. Before she wrote a word, she wrote an outline. To finish her book on time, she needed to know not just her characters and plot, but also the structure before she started writing. She didn’t have the time to rework structure halfway through a third draft. She couldn't have completed her new novel on deadline otherwise. And from what I hear, she’s met the deadline. Thank you, Outline!

My prime directive is writing. Time for writing is my luxury. Or rather, not having a deadline. It makes up for not having a New York Times bestseller. Well, almost. Conception can be a fertile writing experience, but am I using my time appropriately? No amount of preparation replaces a finished short story or a novel draft.

Is an outline the first step or just a bluff?
Posted by Dell Smith at 7:15 AM 5 comments:

Books in My Lobby 8 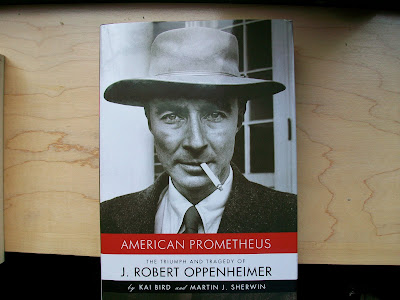 So many books, so few lobbies. Here we have a non-fiction selection, American Prometheus, the Triumph and Tragedy of J. Robert Oppenheimer, by Kai Bird and Martin J. Sherwin. Those piercing blue eyes, that cigarette, that Fedora, and the history of the atomic bomb in one handy book. Winner of the National Book Critics Award for Biography. MEEEOW.

Don't feel like buying the book? Check out all you need to know about atomic bomb history here. Interested in becoming an atomic scientist yourself? Then check this out.
Posted by Dell Smith at 7:19 PM 4 comments:

Email ThisBlogThis!Share to TwitterShare to FacebookShare to Pinterest
Labels: books in my lobby, J. Robert Oppenheimer

For the past month I've been revising a short story based on feedback from the editor of a literary journal who has been dangling the carrot of publication. The first round of revision requests were an interesting batch of additions that had me looking at my story from a slightly new, or rather expanded, angle. One change was a simple search and replace. Elsewhere, I added needed shading to a couple scenes. One of the additions was too difficult to work in; there was so much going on in the story that another layer toppled it.

When I was done I felt the story benefited from the revision. They liked my additions but sent another round of requests. I was happy to make those first rounds of edits. This round seemed more subjective. They mentioned phrases and words that struck them as cliched or pedestrian. They also recommended the reorganization of certain sentences. Again, I took the suggestions and looked at my story from another new angle.

I reorganized the series of sentences as suggested, but I couldn't tell if it made that page better. I know it didn't make it worse. I took out the cliched idea of one of my characters'. Once out, I couldn't think of a replacement, so I reworded the preceding sentence. It changed the meaning a little, but I think the result in the reader's mind remains as intended. I made a few more clarifications, and that finished the second round.

The last time I had a story published, the editors told me they were making small edits and sent me the changes for my review. I couldn't tell what they had changed. The requested edits of my current story were unexpected but not surprising. The editors' reasoning behind them was so thoughtful that I was honored they had given my work such a close read and taken the time to try to make it better. I felt I was in good hands as I made the changes. I expect every journal editor has an idea of what works and what doesn't for his or her publication. Maybe the changes I made better reflect the attitude of the journal.

It's still my work, and I wouldn't have made the changes if I had felt strongly against them. My writing group read the same story earlier in the summer, and I incorporated many of their suggestions before sending it out. If I weren't open to others' ideas I wouldn't be in a writing group or participate in intense novel workshops where a thin critique skin leads to hard feelings and misunderstanding.

I'm excited to have another story published*, but don't feel I sold my soul to get it done. I told a writer friend about the edits, and he told me about an editor who once asked him to change the tense of one of his stories. Did that make it a better story? Who knows, but maybe it fit in more with how that editor wanted to present his publication. What are some of your experiences with journal editors? Were you ever asked to make a change that you didn't agree with? Did the changes make the story better?