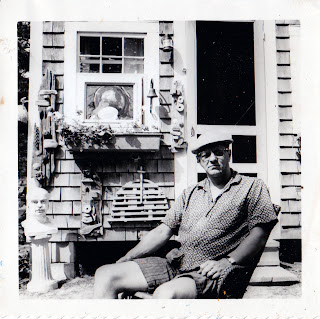 The further adventures of the Smith family, seen through the eyes of patriarch Wendell. The summer of 1961 continues. In this entry, my father sets up his paintings at a local art show in Eastham and  discovers how hard it is to actually get the general public to buy artwork. He meets artist Larry Edwardson and learns about how he became a painter and his process. [Again, I'm transcribing my Dad's pages of longhand writing. Tune in next time for more scans.]

Yesterday I “hung” eight, nine of my paintings in the second outdoor showing of the Nauset Painters, a group of local amateurs, mostly women, who paint boats, beaches, and cottages about as most amateurs paint boats, beaches, and cottages. The exhibit was being held in Eastham on the Green by the old Grist Mill. I arrived with 7 oil wash sketches and one still-life in oil (entitled Still-Life). At the first show on the Orleans Green, check wire fencing had been erected and the Nauset Painters did the hanging for the hoped-for 20% of sale price if anyone bought.

I pulled into the Eastham Green and found painters were staking out claims for space along the split rail fence that boarded the Green. I was told that no other support would be provided. You can’t set matted paintings against a fence (but) you can a framed oil. Luckily, I had a length of rope in the VW and a little grocery store near the Green had clothes pins in stock.

So I rushed back to the Green and stretched my rope along a goodly length of fence beneath a skimpy locust that held some promise of shade later in the day. To my left along the fence I shared spectators with one old Grandma Moses whose husband helped her set up her three cottages. But they were fairly good cottages and drew more favorable comments than my paintings, with local viewers at least.

It was a game to guess whose cottages they were and where they were located. “That looks to the Mayo’s on Tonset Road.” “Looks’ more like that little three-quarter sitting back off Barley Neck just beyond Mabel’s house.” And so it went.

After securing my paintings I took the tour around the 30 yards or so of split rail fence then left the exhibit until after lunch. My paintings were just as I had them. None had sold. Perhaps if I had stayed with the pictures I might have pushed through a sale or two. But I spent most of the afternoon sitting in the heat and shade chatting with the one really serious artist on the field, a Larry Edwardson of New Britain, Conn. He was a man well into his fifties who had worked on newspapers, radio, and for some years had his own advertising agency in New Britain. A few years ago he set January as his target date for self-support by painting alone. Already a good artist, (he was) a member of (the) Salmagundi Club in New York but not too widely exhibited.

He severed his relations, accounts, and began to paint. Within a matter of days he was bedridden with infectious hepatitis and it was eight months before he was able to paint productively. For what I gathered, Edwardson is able to make expenses and keep painting. He has a trailer which allows him to live cheaply, north in the summer and south in the winter. The Cape, Gloucester, Maine, Connecticut, New Orleans, and Sarasota (places he mentioned). It’s his hope to get his paintings placed in a dozen galleries and then spend a month painting local scenes in each place.

Edwardson works almost entirely with palette knife and he has a special set made up from putty knives, filed down to various points and widths. He showed me his paint box. “It was handmade in Italy. A friend bought it for me. And I use a disposable palette. I always start clean each morning.” The artist opened the box with pride for unlike my own it showed signs of long and hard use. The wood was browned with age and weather and the tubes of oil paint spoke of having become part of many paintings.

“This turpentine,” he said, “is just to clean up with. I lay the paint on fresh, no turpentine or oil, with the knives. Why, I’ve gotten so I can make a circle with a knife, just like that.” He flicked his wrist. “I hold a towel in my left hand and wipe off the knives as I use them. So I’m always working clean. I had intended on finishing those two pictures.” He pointed to two Masonite boards with half-finished scenes on them. “But I don’t want to attract a big crowd, get people standing. This isn’t the kind of exhibit for that. If these were real artists, practicing painters, I might. It’s a tough business, boy. If it means selling a painting, most artists would step right in front of your paintings to show their own.”

That must have been my trouble at the Eastham show. I was too modest and nothing sold.
Posted by Dell Smith at 9:21 AM 4 comments: 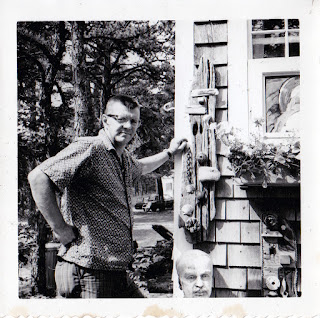 Today I bring you Thursday, July 20th, 1961. Where Wendell goes on an expedition to find The Outermost House, the house popularized by Henry Beston in his book The Outermost House, A Year of Life On The Great Beach of Cape Cod. There are some beautiful nature passages. I know my father admired Beston, Thoreau, and other writers of nature. [No scans of his pages this time, just my transcriptions of his longhand.]

Last Friday, or was it Thursday, July 20th, I drove to Eastham and the Coast Guard Beach. I parked in the farthest lot behind the big dunes, slung my sketching bag over shoulder, and trudged along the tracks left by beach buggies through a notch in the dune wall.

A young boy about twelve fell in step with me. He looked bright and alert so I said to him, “I wonder if you can help me?”

“You want to know where the Outermost is,” he replied as a fact.

“You can’t see it from the ocean side but it’s the next to the last house on the dunes. It’s more over on the dune-side. The Audubon Society has it now. You can’t miss it. It’s white with blue shutters and they have put up a new stove chimney.”

“You see down about the last dune that juts out. About there.”

We had come through the notch and down onto the shelf of the beach. And here surely was the Outermost Beach for it bowed out into the ocean and looked to be the most Easterly of shoals. Bathers and swimmers dotted the shimmering sand to our left but there were only a few people to the right toward Beston’s old home for a year. (Editor's note: Henry Beston is the author of The Outermost House, A Year of Life On The Great Beach of Cape Cod.)

Once on the beach side, the one prominent, persistent part of the scene was the waves. Big and small. Up and down the beach there was always white water curling over and down and on this day with a stiff off-shore breeze, the waves approached the beach fighting the wind, each wave with its mane of white, making them the seas horses that “men call such waves on every coast of the world.” (The Bird in the Waterfall: A Natural History of Oceans, Rivers, and Lakes by Jerry Dennis.)

Henry Beston’s description of a blue wave rolling in toward the beach is a superb piece of writing. It’s found in his chapter “The Headlong Wave,” and carries from mid-ocean and the pulse of the earth that sent the wave coursing westward until it crashes on the beach at Eastham. (Editor's note: As far as I can find, this is a paraphrase of the quote, "Somewhere between this Spanish land and Cape Cod the pulse of the earth has engendered this wave and sent it coursing westward though the seas.”)

I left the boy then and trudged along the ridge of dry sand above the farthest reach of the surf. My sneakers that I wore only bogged me down so I took them off and carried them the rest of the way in my pack. But the hour was late—getting on towards 5:30 in the afternoon—so I never reached the Outermost House that day but turned back half way to the last dune the lad had pointed out.

Much as I seem to read slowly the books I enjoy, so I take my time in finding Beston’s house. It would be there. Like the book it had held fast to its place in the world for thirty years or more. It would be there next week, or the week after.
Posted by Dell Smith at 10:20 AM 1 comment: