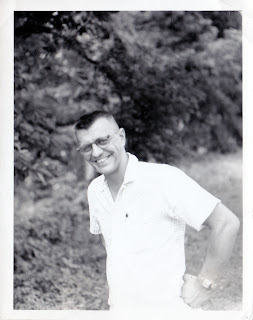 Here's the latest, another scanned couple pages of the next post..er, entry in my Dad's early '60s journal. Highlights include more adventures of an artist struggling to make a living. Also, we discover my mother's secret desire!!! 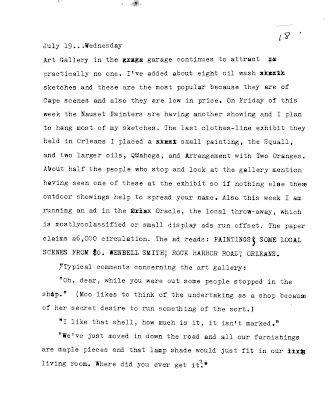 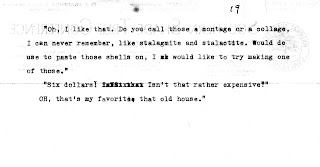 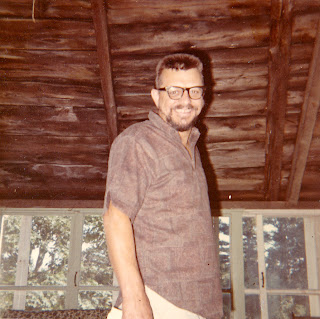 It's been a few months, so let's get back to my father's journal. Here we pick it back up in the middle of July, 1961. His brother, Bob, and his family visit my family on the Cape. Meanwhile my father continues to make a go as an artist. Finally, my folks end up in Provincetown for dinner an eye-opening walk through the ever-present galleries.

Yep, it was the dawn of a new era - where my Dad was getting a firsthand look at Beats and the culture of artists. Remember, this was 1961, and while not exactly square, my father was unused to seeing, as he puts it, the "habitat of beats." [No scans of his pages this time, just my transcriptions of his longhand.]

The Bob Smiths arrived about eight Wednesday evening. Showed them the house, let the kids see each other and rub noses (our had already been tucked into bed, under protest, “Oh dear, now we’ll never get to see them.”) then showed them to their cottage in the woods. Moo and I returned after nine bearing ice bold beer, and we had a good time chatting.

On Thursday morning Moo and Ann took all the kids to Pleasant Bay where Robin, Laurie, and Cindy had to report for their swimming lessons. Bob and I drove off with the VW to sketch and take pictures. A friend of Aunt Moo’s said, oh if she could have a picture painted of the view from Fort Hill. So, obligingly I sketched the scene; that is, I made note-sketches of two or three parts of the panoramic 180 degree expanse of inlet, islands, salt marsh, outer beach, ocean, fields, and foothills. By late afternoon, after a time out for  a swim in Skaket, I had completed a 9x12 oil wash looking north across a cove beyond a cedar meadow, and a 14x17” painting of the inlet to the east, the largest oil wash I have done to date.

Priced them in the gallery. As yet, no comment from Moo’s friend. Though later that evening she looked at them and didn’t care enough for either to buy them. But she told Aunt Moo she might take one of the other small washes. Notwithstanding all this talk, she never mentioned the pictures again.

Saturday morning Aunt Moo drove home with them. Aunt Moo wanted one of the $7 pictures but being family and having stayed here for two weeks she thought she should be given a 20% discount and offered to give me $5 for it. We told her she could have the picture, especially since she had taken us to dinner and to the theater in Dennis.

Then followed much discussion – she said she wouldn’t take the picture unless I took the $5. But how would she carry the picture? Put it in her suitcase? Too big! Wrap it? It would bend. Lay in the car? Too crowded. It was decided that the pictures would stay here and mother would bring it when she drives home to Morristown.

Thursday evening Bob and Ann took us out to dinner. We left at 7 o’clock and drove to Provincetown. It was the first time there for any of us since Moo and I hadn’t gotten any further down on the Cape than Truro.

Provincetown is a rather startling experience. There were the dunes to be seen on the way into town and the long row of tiny cottages along the bay. Then suddenly the road narrowed into one crowded street where the station wagon had to crawl by a single row of parked cars, one sidewalk, and shops and houses fronting almost on the street. Add to this the shoppers and the strollers who step aside as you pass and the whole effect is one of edging your way through some thronging (foreign) street.

They are...a rather varied and motley crowd. Some of the throng comes across the bay from Boston by boat. Some arrives by Cadillac from Hyannis, others by motor scooter from Greenwich Village in Manhattan and the forefathers of many natives came by ships from Portugal and England. And they all make up the unique setting that is Provincetown.

There is much of the arty chic of New Hope here, and much of the grubbiness that has always characterized Bohemia and today marks the beats, but it’s all colorful, much of it talented, part of it great, still more of it without greatness or talent. Commercial Street finally runs its course and cheapens near the end.

We ate dinner in the Flagship and afterwards went gallery-hopping back along Commercial Street. We missed seeing the best art the town offers for at ten o’clock both the Chrysler Museum and the Provincetown Art Association were closed. Still, the people in the galleries proved almost more interesting than the paintings.

In the first gallery we came to, a one man show was being launched with punch bowl, paper cups and all. Having dressed for dinner and perhaps overdressed after wearing casuals for two weeks, Moo and I as well as Bob and I felt much overdressed. In fact, almost pleasingly so, for this was a habitat of beats. There were beards but mangy beards, and sandaled feet that vied for the honor of being the “dirtiest.” (I wondered if these people ever went on the beach but then if they did they might look as though they were square.) The women were variously dressed in a fashion that put them way out. Most with a spooky look (Editor's Note: I'm guessing they wore black eye-liner and maybe black clothes. Spooky indeed!).
Posted by Dell Smith at 9:18 AM 3 comments: