Life magazine online recently posted a list of the top literary drunks and addicts of all time. The list includes great photos and fun facts about iconic figures of the literati, and its scope extends beyond (but still includes) obvious literary addicts Charles Bukowski, William S. Burroughs, and Jack Kerouac.

Find out what vice your favorite writer was partial to. For example, Tennessee Williams was fond of alcohol. What was another of his weaknesses? (Hint: it starts with amph and ends with etamines). How did Louisa May Alcott get hooked on morphine? Did Dylan Thomas actually proclaim, "I've had eighteen straight whiskies, I think that is a record," before he keeled over at the Chelsea Hotel in November, 1953. What famous writer, who died in 1984, and was hooked on booze and various drugs, had this to say about himself: "I'm an alcoholic. I'm a drug addict. I'm homosexual. I'm a genius." Hint: he wrote In Cold Blood.
Posted by Dell Smith at 10:03 PM 2 comments:

Agent Nathan Bransford has a totally fascinating forum question going regarding Men and Fiction. Where are all the male writers? There are many, but not as many as there are female writers (or so it seems). Is that because fewer men read than women? I have to say, I read more male authors than female. Not sure why, I guess I just relate more to what male protagonists go through. Or maybe it's the male sentiment filtered through the writer. Plus I get more out of reading authors of my generation.

When you're done with that forum topic, check out the rest of Nathan's site: lots of great publishing advice for writers, such as how the publishing process works, how to find a literary agent, and how to write a synopsis.
Posted by Dell Smith at 9:23 PM 3 comments:

Ideas for stories and characters often come from unexpected and unusual places. We fiction writers have a habit of jotting down overheard conversations, collecting interesting articles, and maintaining family history in the hope of somehow using these unique details in our writing. But there's another type of object that can be used for inspiration for a story or character. The found object. 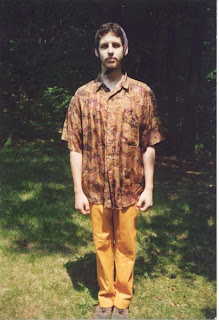 What's a found object? Literally something you recover that someone has discarded or lost. Found objects can be a grocery list left in a shopping cart, a crumpled note tossed from a park bench, or a love letter in the glove box of your rental car. Let's face it: this stuff has been permanently separated from its owners. It's now public property, and if you find it, you are its happy new owner. It's a safe way to be a voyer. If this all sounds a little skeezy, well consider that there is a legitimate subculture of folks coveting lost/discarded items, giving them a second life as curios and conversation starters.
For example, take this dashing young man in the above photo, found in a book from a library book sale. He could be a character in my next story. He's fashionably dressed, and has topped off his outfit with a bandanna tied around his head. He seems like a brother or a boyfriend, a co-worker or stranger on the street. It's up to you to shade in his backstory and make him fit into your fictive dream. Some writers use photographs of people to help them describe a character's physical appearance.

Other sources of found inspiration can come from notes, cards, and letters. They don't have to be full of detail for you to get an idea or feeling for a character, or to picture a situation that could start a story or give an idea for a scene you've been having trouble getting right. 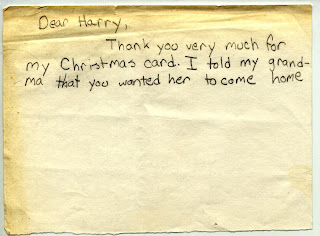 The note to the left was also found in a used book.

There's a lot going on here. First, it's obvious the writer is young, just a kid. The recipient sent this kid a Christmas card. But the last sentence is the killer. The kid is the go-between, the beard. Who is Harry? The kid's father? Grandma's second husband or boyfriend? A fiction writer could unfold this family drama any number of ways. Was the note tucked inside Harry's book? Was it a note written and never sent? It's up to you. Do what you will. 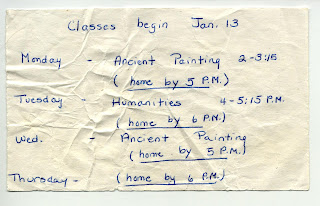 The note on the right is a found class schedule. Upon first reading, it doesn't seem that special. But take another look: this student is well-organized, and needs to know just what time she will be home. But why? For dinner? To pick up her kid? So she can allot enough time to do her homework? This schedule could hold the key to one of your characters, that final personality trait puzzle piece. 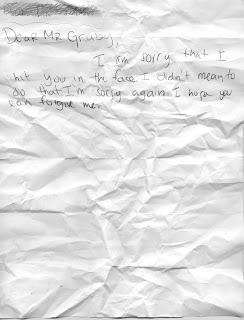 Here's another note, an apology. From a student to a teacher? From one neighbor to another? The son of a family friend? This note brings to mind a kid who's a little wild, out of control. I'm not sure sorry's going to cut it. What could have prompted this situation and how did the apology come about? Angry parents insisting? Expel the kid unless he plays nice?


Found objects come with hundreds of built-in possibilities. You probably have a few found objects around your house whether you know it or not. The next time you're in a used book store, make sure to pay attention to those lost treasures between the pages. The next time you see a photograph dropped on the ground, pick it up. It might hold the key to your next scene, a new character.
I leave you with two last finds. Who know? Maybe they'll give you some found inspiration. (Click them to see them larger.) 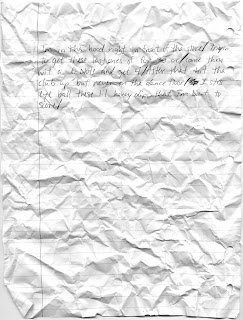 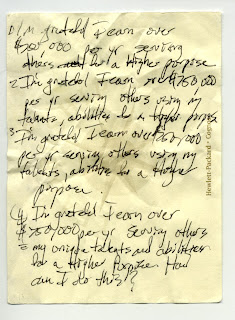 Hey kids, ever wonder how writers become writers? Curious about whether you've got the right stuff to live the writing life? Dell Smith tackles these issues, and much much more this morning over at Beyond the Margins.
Posted by Dell Smith at 7:35 AM 7 comments:

Email ThisBlogThis!Share to TwitterShare to FacebookShare to Pinterest
Labels: the writing life

Books in My Lobby 10 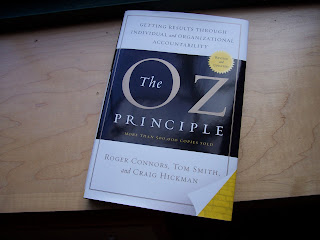 Tonight I offer for your reading pleasure The Oz Principle, by Roger Connors, Craig Hickman, and Tom Smith. What's it about? How about this: "A decade ago, The Oz Principle took the business world by storm. The principle works like this: Like Dorothy and the gang in The Wizard of Oz, most businesspeople have the tools to succeed, but when things go wrong they blame circumstance or others instead of looking within for the true cause of unsatisfactory results. Once individuals learn to accept responsibility, they can use the Oz Principle to become better leaders. This philosophy can be encompassed in one word: ACCOUNTABILITY." Say no more. I'm in!

The book has been such a popular best seller that The Oz Principle is also an accountability training company. Learn how to increase revenue and profitability. Reduce costs. Impliment key innitiatives. Sounds like every writer's dream.

Not sure if it's for you? Still in the dark about how ACCOUNTABILITY works? Do you blame others before accepting responsibility for your screw-ups? Then I leave you with this parting video: