Part 2 of my interview with my parents, Wendell and Muriel Smith. The saga continues...

Dell: That brings us to Muriel...

Dell: (to Muriel) You also grew up in New Jersey.

Muriel:  Well, it may have affected us but I don’t think so. My particular family. My father had just opened his first auto supply store (Dean Phipps Auto Stores). About 1923 or something. By the time the Depression began at the end of the 1920s, he was doing very, very well. And that was the kind of business that flourished during the depression.

Dell: Sort of a do-it-yourself. Instead of buying a new car you would buy the parts to fix the car you had. 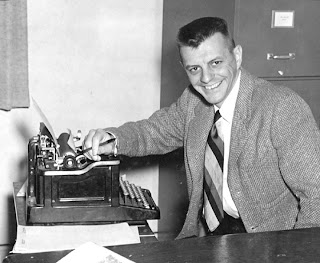 In the next few months I'll be posting the writing of my father. As we clean out his bedroom we collect his work, which takes various forms: typed stories, hand-written pieces on lined paper, ideas on index cards, file folders and manilla envelopes with full-length manuscripts, college essays, printed articles. All of it analog, nothing in digital form. Which means it needs to be digitally archived, either transcribed, scanned, or photographed.

Among his papers are: issues of Driftwood, a monthly poetry anthology form the 1940s in which he published early poems; two novels; a book-length exegesis of an ornithologist; type- or hand-written journals detailing the years he met my mother (I found the very entry where he talks about their first date! He was smitten from the first.), a joint journal kept by both my parents during their honeymoon when they drove from the East Coast to California to spent six months atop a mountain where they were employed as fire lookouts, and his journal of the family's move from Pennsylvania to Cape Cod in early 1961.

There are also boxes of family photographs. I don't know if other families took as many photographs in the early mid-twentieth century, but cameras must have been yearly Christmas gifts for the Smith family. Dad was also a painter and illustrator. Aside from his love of birds, he took to doing watercolors and charcoals of beloved Cape Cod themes, adding his spin to light houses and crashing waves and soaring seagulls. He sent me cartoons when I was in college; he was influenced by Trudeau's Doonsbury comic. So I will post some of his artwork here as well.

It all amounts to an archive whose breadth and depth my father only occasionally hinted at during his later life. Wendell was a WWII glider pilot, a used book dealer, a writer, nature lover, a father of four kids, husband of almost 60 years to Muriel, herself a writer and book lover.

To get things started, I'm posting part 1 of the transcript of a recorded interview with both Wendell and Muriel Smith, when they lived in Florida, on Anna Maria Island, May 25th 2009. I'll post part 2 in the next few days. 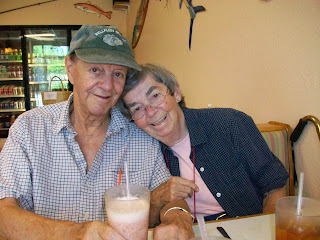 Topics discussed: writing, reading, agents, literary influences, growing up during the Great Depression, WWII, living on Cape Cod, raising four kids to be readers and writers, buying and selling used books and antiques, how the Internet changed everything, the benefits of writing long hand, publishing cartoons in the New Yorker, publishing articles in Classics Illustrated, and meeting Kurt Vonnegut.

Dell Smith: So, we’re here with Wendell Everett Smith and Muriel Phipps Smith. And we’re just going to be talking a little bit about writing and Smith family writers. (To Wendell) You grew up in New Jersey.

Dell: So that must have had a bit of an impact on growing up and the way your family—

Wendell: Well it did, but you know, you’re a kid. You don’t really know. We weren’t starving to death or anything.